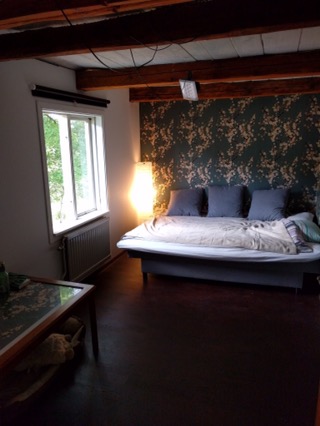 The room we now call the Japanese room is the first we’ve taken on renovating. It’s supposed to be used as a small guestroom, but the japanese influence kind of invented itself. When we found a wallpaper we really liked in Warszawa, we decided to continue on the asian track, and bought dark oak floortiles that would be a nice match.

The original interior was quite old and bore marks from the intrepid design choices of the 70s, as well as many years of service as a teenager’s room.

The first time we saw the room, in january 2015

We started by tearing everything down. Ceiling, wallpapers, floormat.

Our friends Filip and Yasmina came by to help us with the destruction. After a beerwalk.

The most exhaustive moment was the restoration of the horisontal bolts we found above the ceiling. Some bolts had a really rough finish. A few axe markings can be beautiful, but splinters and miscoloured spots had to be planed away.

The exposed planks that were to became the new ceiling was extremely hard to saturate with paint. It took several hours of stroking and splashing before we decided to cover the bolts and use the spray painter instead. Defenitely a good choice, and a lesson learned before we continue with the remaining rooms.

The bolts were oiled with brown tinted chinese wood oil.

The walls, wich we had to extend 15 cm to cover the space previously hidden between the bolts, got a layer of construction wallpaper to even out the seams. After that, the floortiles could be installed.

Did I lay the tiles, or did the tiles lay me?

Application of the final wallpaper made the whole difference.

A futon style sofa, rice lamp, and a remodeled coffee table with the remaining wallpaper under the glass, adds to the asian impression.

Good thing: the old ceiling lists could be reused as floor lists without any changes.

Bad thing: there will be a real hassle to cut out the new ceiling lists with all the joints and angles. A consecuence of solving any mismatching with the wallpaper edges with the comment: the list will cover it…

Anyway, if not finished to perfection, the room is inhabitable, and a few guests as well as ourselves, can verify that the sleep is formidable.