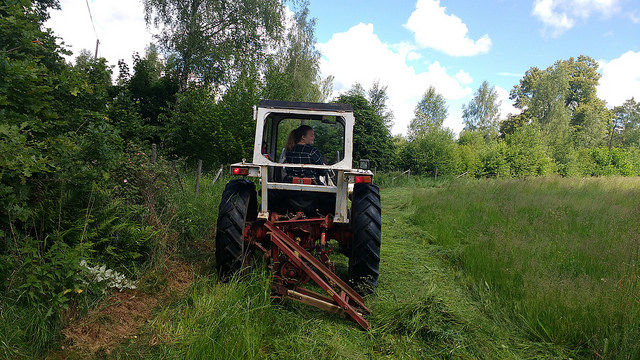 Half-way through our first grass to barn hay harvest we are beginning to have a picture of what the process is all about, and what tools, techniques and machines that can be used or should be avoided. We started of with no knowledge or machinery but the internet and a tractor, but we figured that would be a good start since we at least were better off than the farmers working the lands manually just 70 years ago.

The grass was growing and looked mature, but how could we know when the best time for the first harvest would be? We could keep an eye out for when neighbour farms started to cut, but since all other farms in the area are producing fermented hay for cows or horses, they would have an entirely different approach since they’re less dependant on drying times and the straw length for producing small bales.

We found that most of the information is found online at http://vallprognos.se/ where test samples from farms from all over the country are displayed, and a prognosis of the hay quality at the day of harvest is provided. As the goats likes heavier hay, with a higher cellulose content, than cows and horses, we decided that we could wait longer than the recommended harvesting date, and went for a week before midsummer when the weather forecast looked promising for drying hay on the field for a whole week.

We realized that we needed three machines, a cutter, a tedder and a baler. We found an old sickle cutter left on the farm that looked like it could be used, and we actually managed to cut the small field (½ hectar) before we gave up on it. The construction was very weak, so when a twig or a thich chunk of hay would hit the sickel, the wooden connecting rod broke, and after manufacturing several new rods from an oak plank, we started looking for another solution.

Since we soon would be baling the hay, we were looking for a baler, and one of our neighbours had one that he hadn’t used for 10 years or more. When I was picking it up I asked him if he knew anyone salling their harvester? He didn’t, put he told me there’s one laying on his junkyard up for grabs. It had certainly been there for 20 years, but after scaring away the surrounding wildlife, I managed to drag it home, greased it up, made a new connecting rod, and had it working in less than an hour. International harvester should have some credits for reliability.

When both fields where cut, we wanted to get the hay dry as soon as possible. The son of the previous owners gave us an old belt tedder that did the work perfectly. When ran on high gear (1040 RPM) from the power outlet, it spreads the hay in a thin layer all over the field wich dries surprisingly fast on a sunny day. After turning it once, we ran it on low gear (540 RPM) to let it produce strings for the baler to pick up.

After five days of drying on the field, the hay was ready to be baled and stacked up in the barn. Since the baler hadn’t been used for several years, it needed a litte care, and I needed to learn to thread it. Luckily, I found a manual for the Welger 450 baler on a forum https://www.maskinisten.net/ and another of the previous owners sons had some experience in threading the machine. We got it working pretty quick, even if it only binds on one side for the moment. But thats enough.

Since the baler runs really slow, we realised that the more work we put inte making straight thick strings with the tedder, the faster it gets done. The tedder can be run at least five times faster than the baler, so one extra turnin of the strings is really worth it.

After baling, we took out the old wagon and loaded up the bales. 3 loads from the small field, and 6 from the big field resulted in about 400 bales, averageing at 8 kilos. 3.5 tonnes of hay is now stacked up in the barn, meaning that we’ve covered half of our goats needs this winter. We’re expecting a little less from the second harvest, but if the fall is warm, we can take a third harvest in late october, that hopefully will be enough for the whole winter.

What to do better?

A few weeks after the first harvest I came across this very helpful article from Iowa State University (the Americans have some real fine approaches towards small scale farming) . I wish I had found it a little earlier. Our chocie of cutter seems to be valid, even if it’s slow, we wouldn’t gain much in speeding up the cutting part of the process on our small lands. Maybe 2-3 hours/harvest. If we’re getting a knewer cutter, we would most likely get a new sickle cutter, but maybe on that moves in both directions, and is less likeky to collect wet hay and completely eliminates the need for jumping of and cleaning the sickle bar now and then.

The belt tedder is a simple and powerful construction, we’ll stick with that one.

If we’re getting a new baler some day, the mini round baler mentioned in the article would be an intreresting choice. The Welger 450 baler sure is heavy, and the density of the bales could be higher, but given that mini round balers not are very common in scandinavia, we’ll most likely stick to square balers from economical reasons.